Unintended consequences of the TSA regulations

You'd have to be astonishingly ill-informed to believe that you could waltz through USA airport security with any recognisable knife in your carry-on luggage. TSA regulations specify:

Knives
Carry On Bags: No
Checked Bags: Yes
Except for plastic or round bladed butter knives.

Now, I'd read that as "you can have any kind of knife in your checked baggage apart from plastic knives or round bladed butter knives" but I'm a pedant; the overall guidance is clear.

A couple of weeks ago, my pal Harry turned up to San Francisco International Airport (motto: "Fogged in by design") for a flight up to Washington state. He wasn't checking any luggage, just carrying a backpack. Shortly before security he reached into the side pocket of his pack to get his passport, and while fumbling around he came across the folding knife that he'd left in there on his last hiking trip.

Oh well, better to discover it now than later. He could have surrendered it to the TSA contractors but it had been an expensive knife when he'd bought it, and he'd had it a long time. He was damned if a TSA-contracted monkey was going to take it from him.

Not a problem! Airport Mailers are a company that allow you to mail items to yourself from the land-side of an airport. Harry walked over to the Airport Mailers kiosk and asked them for a pouch to mail his knife back.

"Sorry, we're out of pouches." Apparently they'd been out for most of the past week, and were "optimistic" of getting a delivery in the next few days, but of course that did not help Harry. Harry starts to see why there is less than enthusiastic endorsement for this firm.

Harry realises that he could just drop the knife in the "Sin Bin" box at security, but he would lose it forever and it was an expensive knife when he bought it, and has a lot of sentimental value. Pondering the problem, his gaze alights on the plants in tubs used to decorate the hall: 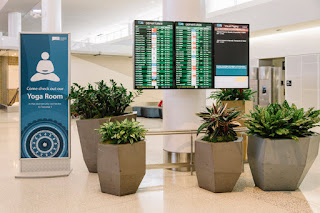 "Problem solved!" Harry pulls out his folded knife, palms it, and sidles to the corner of one of the planters containing a particularly bushy plant. He casually slips his hand under the leaves and gropes around trying to dig unobtrusively a hole in the soil to fit his knife.

This admittedly ingenious strategy is sadly not original; as Harry pokes his fingers into the soil, he discovers a wooden object that is indisputably a knife handle. It seems that, as he pokes around, what feels like half of the planter is taken up with buried knives.

Harry, undissuaded, finds an undisturbed corner of the planter, furtively buries his knife, and heads off to the gate. 48 hours later he's back, coming out of Arrivals. He wheels left, locates the planter, digs his knife out from the corner, and strolls off to his car. In the process he discovers that the other knife has vanished.

No doubt the TSA would posit this as a security "win", but it's not obvious that this is true. People are stashing knives all over San Francisco airport, and seem to be able to rely on picking them up again when they return. If they can manage this in a heavily-patrolled airport departures area, how effective do you think the TSA Security Theatre is at keeping hundreds of aircraft in an "allowed" state?

First man in the UK to give birth is from Gloucester

Of course they're from Gloucester.

So how did this miracle occur, such that Hayden Cross managed to pop out a baby?

Hayden was born a girl, called Paige, and plans to continue gender reassignment treatment now he has become a father.

Aha. So Hayden has a womb, at least one ovary, and presumably a vagina. I don't know about you, but when someone has those assets - and no testes, since Hayden had to find a sperm donor - I'm inclined to think that they don't actually qualify as "male".

Popping out a baby just before gender reassignment surgery seems like an odd choice. Almost a case of trying to have your cake and eat it. Not terribly committed to the whole irrevocable life-as-a-man thing. I wonder how long before Hayden will get tired of it and want to change back.

Despite the headline, this is not a miracle. This is attention-seeking behaviour if ever I saw it. That's fine if it's just you who's affected but, my goodness, I feel sorry for Hayden's daughter. How is she going to feel once she grows up enough to understand what went on?